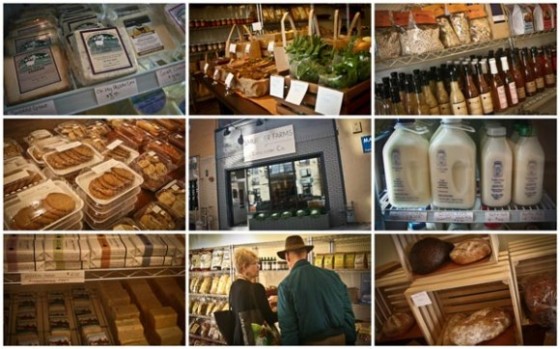 As someone who is constantly on the hunt for quality produce, dairy and meat, I was particularly excited to finally check out Smucker Farms of Lancaster Co. The owner, his family and a few local producers hosted a grand opening party where a number of food bloggers and local residents got to sample a variety of the items sold in the store

It’s a simple, unassuming store front — so much so that Tammy and I nearly walked right past it. Smucker Farms was founded by Eric Smucker, a Lancaster-native and long-time DC resident, to create a direct connection between producers in Lancaster County, Pennsylvania, and consumers in DC at their store at 2118 14th Street (just below W), which opened last November.

“I was between jobs as a result of the financial crash,” said Smucker. “It wasn’t a good time to be in finance! I was at home in Lancaster and felt the residents of DC were missing out on all the great produce and goods coming from where I grew up.”

The now settled into store features produce, meats, milk, cheeses, ice cream, gelato, baked goods, kombucha and more. At the moment, about 85% of the store features items or goods sourced or made in Lancaster County but they hope to flip that number to feature items or goods sourced from right here in DC. A few of the items that stood out to me were bottles from DC’s first kombucha microbrewery, Capital Kombucha, pickled items from Gordy’s Pickle Jar and pints of my personal favorite, Dolcezza Gelato.

Check out the rest of the story on Smucker Farms of Lancaster County at Borderstan.com!