Note: This post is a contribution to the first ever Naptime Chef & Small Kitchen College Slow Cooker Challenge! You can enter to win a really awesome slow cooker on either site, so go check out all the recipes, get inspired and enter! There’s also a Twitter chat Wednesday, January 18th from 12pm – 1pm ET, #slowcooker, to help you get in the mood!

I’m gluttonous. I love dulce de leche. So much so that sometimes when I buy alfajores from my local coffee shop, I twist them open like one would normally do with an Oreo and lick it right off the cookie.

But I’m also lazy, and kind of scared of making the stuff. Traditionalists make dulce de leche from scratch by simmering milk, sugar, baking soda and vanilla. Braver folk than I simmer cans of sweetened condensed milk in water on the stove-top. And then there’s what I do.

It’s not a secret method – it’s all over the internet – but I’m willing to bet you either haven’t heard of it, or kinda discounted it. Plopping cans of sweetened condensed milk in a water filled slow cooker for 8 hours achieves the same results as stove-top boiling, without that pesky fear of exploding cans!

So there you have it. You’re gonna put two cans of sweetened condensed milk in your slow cooker – one if you’re making some lame attempt at moderation – fully submerge them in cold water, covering them by at least an inch, cover and set your slow cooker to low. I like to set this up for over night cooking because a) it’s nice to wake up to dulce and b) it’s a great excuse to force myself out of a cozy bed.

You’ll want to let the cans cool a bit before opening them. I give them about an hour – you know, while I make coffee, shower and get ready for the day. Then I open those cans up and unabashedly dip my spoon in and have a scoop.

Now that you have two cans of the stuff, whatever will you do with it?  END_OF_DOCUMENT_TOKEN_TO_BE_REPLACED

I think it’s fair to say I’m obsessed with “Mexican” chocolate desserts. I made those cookies…and now this torte…and every coffeehouse I dip into I ask if they have Mexican hot chocolate. 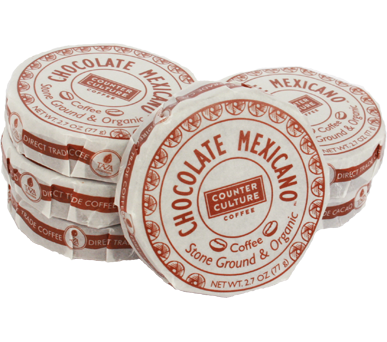 There’s no magical ingredient here. It’s not rocket science. Nor do you need to run off and purchase expensive ingredients. One needs only to own adobo chili powder and some cayenne pepper.

A dash of each adds just enough heat and a subtle deep smoky chili flavor that all your chocolate dishes are really just crying, nay, screaming for.

I didn’t snap a photo of the completed torte but you can check out the original recipe and photos over at Design*Sponge. It’s a really elegant looking and tasting dessert. I’d put this in the category of “things I’d take to a dinner party.”

It’s something like the best, gooeyest, just-barely-cooked-enough brownie you’ve ever had. And then I went and added all that Mexicanness and flavor just went and blew up in your mouth. Yeah. Get hyped!

Recipe after the jump…

END_OF_DOCUMENT_TOKEN_TO_BE_REPLACED 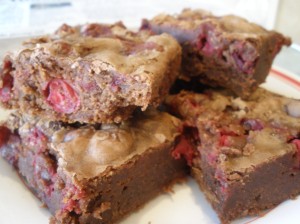 I think I learned something about myself this weekend. Brownies don’t do it for me so much. I have a favorite brownie base…and boy I love me some cheesecake brownies…but ya know, when I’m looking for a chocolatey cake-like baked item…I think what I’m really craving is a moist chocolatey cake. Maybe I’ll get to that later this week.

Anyway, you guys remember the cranberry brownie fail. It sucked. So I went back and tackled it, this time using the brownie batter Smitten Kitchen used in the afore-mentioned cheesecake brownie recipe (which was adapted from a Gourmet recipe) and completely ditched the cheesecake-y-ish swirl idea.

END_OF_DOCUMENT_TOKEN_TO_BE_REPLACED

It had been such a good day…The BF and I had decided to stay in…lounge and maybe watch a movie (more on that later)…and then I decided to try a recipe I’d read last weekend.

See…my mom had bought me the Perfect Brownie pan awhile ago, and it came with a recipe book. There was a recipe for cranberry brownies with a sour cream swirl akin to a cheesecake swirl and I fell in heart with it. I happened to have a bag of cranberries so, game on.

As soon as I tasted a cooling brownie square I thought to myself, “WHY didn’t I just use the brownie base from that Smitten Kitchen recipe and go from there?!” Something I’ve come to learn is that, while you have to try new recipes and experiment…you should also be smart about it. My batter was stiff and I should have trusted my gut when I realized that. There was only cocoa powder, no melted chocolate…resulting in a very un-chocolatey, un-gooey brownie. The “swirl” didn’t swirl well and had a soupy consistency. END_OF_DOCUMENT_TOKEN_TO_BE_REPLACED