I’ve started a marathon of traveling adventures. It involves a lot of bopping around the country for work and a little time at the end for myself. New York, DC, Boston, DC, Austin, Phoenix and finally DC again! I’m looking forward to the miles earned and the work outs (I always work out more when I travel) but the packing and the lack of sleep will suck!

I was in New York City this weekend and there was a trip to The Met. I felt so sophisticated…if not for some Game of Thrones references in the armor room and a Stargate mention in the Egyptian wing. 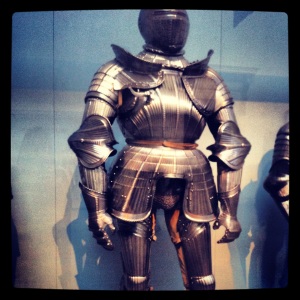 I also bought a new 13″ MacBook Pro and a new couch. Despite having budgeted for these items I still had a chest-clutching moment of fiscal regret. I’m already over the cost of the computer – as I sit here typing on it I’m already in love. The couch. Hopefully I’ll feel the same about it when it arrives.

What have you guys been up to? Next week I have a great “best thing I ate last week” for you. Not that I haven’t been eating great food lately, but nothing’s been much of a stand out. What eating adventures have you been on?