What goes better with carne asada tacos than guacamole? Um. Nothing.

I love guacamole. It’s my favorite summer snack. Sometimes the avocados don’t even last long enough to make it into the bowl for mashing…I just love to eat them with a sprinkle of salt.

Everyone has a trick to making the best guac ever. Well, mine is cumin. Balk at it if you want, but it totally changes the stuff. Including it is to make your summer bbq memorable. To not include it is to, well, miss out.

END_OF_DOCUMENT_TOKEN_TO_BE_REPLACED

Finally, folks! Here is the first in a series of long-awaited Beach Trip Cooking Posts! Oh yayer! I know you’re as excited as I am!

Before we left for Rehoboth Beach, DE (over a week ago now) I had grandiose plans for laying out a menu for each day, shopping ahead of time, marinating meats over night, bringing an ice-pack bag for delicate foods or spices from my own cupboard.

Yeah none of that happened. Work was crazy, The BF moving in cause mental havoc I couldn’t overcome and I was just tired. We left for the beach on a Wednesday and I’d had a friend staying with me until the Sunday before. It was just. Too. Much.

Fast forward to Wednesday, the day we were set to leave. Of course the day before you’re supposed to be out on vacation it’s like the whole world voms in your Outlook Inbox! So in between meetings, prepping documents and taking phone calls I hopped on Epicurious with a vague idea of what I’d like to cook. This, our first recipe in the beach installment, was born of me wanting to marinate chicken in a greek yogurt sauce.

If you’re anything like The BF you are totally weirded out by the idea of a) marinating in dairy and b) grilling dairy. Well, I wasn’t and so off we went. (Ever heard of buttermilk chicken? Yeah.) I didn’t want a predictable tzatziki, and the abundance of cilantro at the markets has really inspired me lately…so when I found this recipe I was done looking.

It was easy enough to pull together, and very refreshing. As a marinade…eh…it’s a toss up. I’m not sure the meat gained too much from marinating it in the sauce except for an occasional note of charred cilantro, but it was a nice thought. What it was good for was dipping the grilled-to-perfection chicken in after the fact!

If you are using the sauce as a marinade, like we did, be sure to reserve about 3/4 cup for dipping the chicken or veggies later! This leaves you enough sauce to marinade up to four thick chicken breasts. I went for boneless, skinless.

END_OF_DOCUMENT_TOKEN_TO_BE_REPLACED 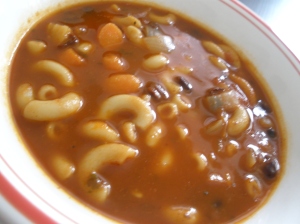 Want something easy to make for dinner? Something that’s tasty and carby and mmmm it’s cold outside!? This is the soup for you!

It’s from Giada De Laurentis who I generally regard as the cutest cook on Food Network. She’s the kinda girl I’d like to be gal pals with. We would make big yummy Italian dinners and then eat chocolate ricotta mousse afterward laughing about the night’s events. Or something.