I’m a dork. So when I decided to make albondigas (pronounced al-bon-dee-gahs) earlier this week I ran around saying, tweeting and emailing “Cloudy with a chance of ALBONDIGAS!!!” to everyone I knew. I thought it was funny…so did my Great Great Boss who, in a very Sabado Gigante voice says, alllllBONdigaaas!!!, every time I say I’m going to make them. It’s fun times all around when albondigas are made.

The first time I made these bad boys it was a bit of an experiment and The BF was forced into partaking. The original recipe, poor misguided soul  whoever wrote that thing, called for a HALF A CUP of adobo sauce. Crazy pants. More like poop your crazy pants. The sauce was so spicy, so hot that The BF and I kept having to stop and breath, open-mouthed and frantically sip water in a really lame attempt to please, please stop the burning. It was too good to stop eating though. So we pretty much decimated out taste buds and ended up eating the whole pot of albondigas. 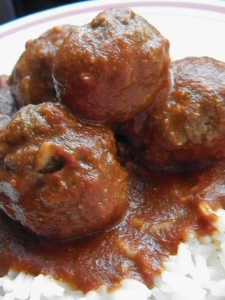 This time, my second time making them, I cut back on the adobo – just 2 tablespoons to the whole pot – and while it didn’t give you that spicy kick, it did give you that smoky flavor adobo is so well-known for. Next time, I’ll add more, maybe 3 tablespoons or 4. The lesson here though folks – add the adobo in small increments and taste along the way. Also, the original recipe included the chipotles that are almost always paired with the adobo sauce. Um. No thanks. Well, I take that back. Do it…but like, half of one.

I feel like such a lame half Mexican-American. My tolerance for spicy isn’t so much low as it’s that I’m a baby about my tongue burning. What!? It’s an uncomfortable feeling!

Anyway – you guys will love this. Enjoy!

PS – These are more Spanish style albondigas – Mexican style goes in a brothy soup. Also, you can make the meatballs smaller and serve them as an appetizeror tapas, or make them the 1.5 inches as stated in the recipe and serve them as a meal. I usually serve them on a bed of long-grain rice!

PPS – I changed the order of the steps in executing the recipe. A friend alerted me that if you don’t read the whole recipe through first you lose cooking time on the sauce.