NOTE TO READERS: You’ll want to use this crust recipe for the cheesecake! Sorry for any confusion!

If you’re just catching up on the story, last week I got it in my head that goat cheese needed to be a part of my life. And it needed to be in a dessert.

As I sifted through recipes and links saved, I came across Not Derby Pie‘s goat cheese cheesecake with caramel sauce. Her recipe sounded like it would hit the spot…but as my desire for goat cheese turned a wee bit obsessive. I decided the cheesecake had to be ALL goat cheese…no cream cheese at all. After about an hour of research (which I totally did NOT do while I was at work) and many recipes read later, I settled on an old Food and Wine recipe with some minor changes.

I like this cheesecake because it doesn’t have that heavy quality that most cream cheese cheesecakes have. It doesn’t coat your mouth in an uncomfortable, “I need a glass of water after I eat this.” sorta way. Like I said, it’s light, it’s airy…you can even see the air bubble craters on the top!

As the idea came together, I decided that I HAD to have a garnish for the cheesecake. Story time: I have a photograph in my bedroom that I took in Barcelona, Spain at the Park Guell designed by Antoni Gaudi, famous for his mosaics. The picture I took happened to be a large circle on the ceiling of a massive covered area of the park. Ta da!! That’s the inspiration for the lemon peels! See the squiggles?! Okay, maybe I’m the only one who thinks this is interesting…

Back to the recipe. This is one of those painfully simple recipes to execute. Don’t worry. You won’t mess it up. I will, however, warn you that a penchant for goat cheese is going to put a dent in your wallet. 11oz of goat cheese cost me about $15. So…wait until pay-day or make sure you really want it.

END_OF_DOCUMENT_TOKEN_TO_BE_REPLACED

Yesterday I shared how to make the candied lemon peel garnish for the (trumpets, please) goat cheese cheesecake (which, coworkers gave an overwhelming thumbs up), but today I’m getting back to basics with the perfect cheesecake crust.

I don’t know about you, but I love a strong graham cracker crust on my cheesecake. Something crunchy, buttery…rough almost…to offset the heaviness cheesecake can often bring to your mouth. Personally, I think a classic graham cracker crust is the best way to go, and this particular Ina Garten crust has never failed me.

First, a tip for crushing the graham crackers (or those Teddy Grahams if you’re in a pinch). Most will tell you to put the crackers in a ziploc bag…then put that bag in another ziploc and go to town on it with a rolling pin. Well you know what! That still leaves me with a mess on my counter, so screw that! Plus it ruins two ziploc backs!!

Put the crackers in one bag, and put that bag in your mixing bowl. Grab a heavy-bottom glass (nothing that’s gonna break too easily) and pound the crap outta those crackers. 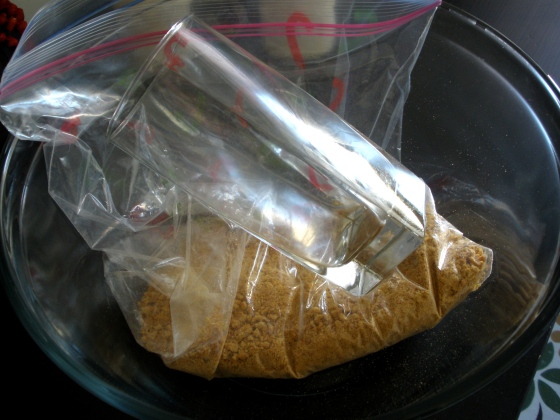 Now that you have your crumb, follow the recipe (after the jump) to make your crust…’cause this is where we get down to brass tacks.