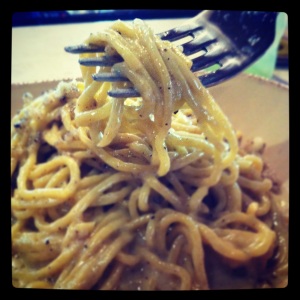 It’s been a sad week for the Toki Underground family. Earlier this week it was announced that Montserrat House would host a Vietnamese pop-up called “Pho U,” which featured Toki Underground chef Thang Le.When the event was suddenly cancelled, announced via Twitter, we learned that there’d been a sudden and tragically loss in the family. While we still do not know how or why we lost Chef Le, there’s been an outpouring of support from the food community. While Toki Underground has reopened, “Pho U” has been postponed for the foreseeable future. City Eats sends our love and condolences to Le’s family, friends and colleagues.

If ever there was a time for comfort food, it appears that time is now. The Washington Post has a run down ofcomfort dishes reinterpreted by DC chefs. Head cheese sliders anyone?

Oh, Mike Isabella. How you love to tease us so! The Top Chef-er is playing coy again — this time in response to rumors that he’ll be opening a Greek joint on 14th Street.

Read the rest of the week in food news at City Eats DC’s blog, The Plate!