In case you don’t live in DC…it snowed. All. Day. Saturday. Something about a snow day like that just makes you want to cuddle up on the couch with a blanket and a book and maybe some cider or hot cocoa. Doesn’t it? Or maybe if The BF happens to be in town you get a request to curl up with a big, thick bowl of beef stew!  And as my Twitter buddy @jeffdonald pointed out, *flexes muscles* only amateurs stock up on TP and milk during a snow storm, pros stock up on stew ingredients. 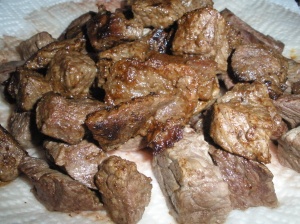 I’m a regular reader of The Kitchn, a cooking and, uhm, kitchen, blog. And last week they had a really lovely post about how to make beef stew…breaking it down into totally understandable, basic steps. I don’t know about you but I always feel a little safer when I understand why and how each step is carried out in a recipe. (The exception being baking, because I still don’t understand what baking soda vs. baking powder does.) 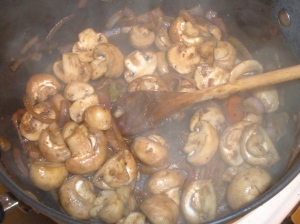 Let me add a few notes here before we get to the recipe. This is one of those dishes you make when you have time. Like, a whole day. Not because it’s necessarily going to take a whole day, but because it’s soothing to methodically take on the recipe one step at a time. Sear the beef. Saute the veggies. Measure and add the liquids. Let it sit for delicious hour after hour. Each step only takes a few minutes, but tending to it makes you feel like you’re adding layers of flavor to a tiny stew baby that you’re going to serve to people you love.

Further more, there’s booze in this recipe which means you get to drink the extras. The original recipe called for red wine. Well, I had no red wine and was NOT about to go back out into the snow, so I used white wine and it turned out just fine. You can also use beer. Or whiskey. Or bourbon even. Just remember, the more flavorful the alcohol you use for the deglazing process, the better the result.

Ahhh, the deglazing process. It couldn’t have been more anticlimactic for me. See, I don’t have a dutch oven. I have a very large non-stick stock pot (kinda like the one in the back of the picture there). So scraping up the crusty, burnt bits of chuck roast wasn’t so scrape-y and crusty. It was more slide-y, oh that was easy! Regardless, it did was it was supposed to and the flavors were there. That’s all that matters.

But when it finally all came together, it was beautiful. The last step in a stew recipe is to thicken it up with some flour. I don’t know about you, but I think this step is kind of gross. It’s just the consistency of flour and stock…the weird lumpy thickness. Blagh. But when you put the mixture back into the pot of stew, and watch it thicken up, it’s like heaven.

Last cook’s note. Have some crusty, warm bread on hand for this. We didn’t and it made me oh, so sad. 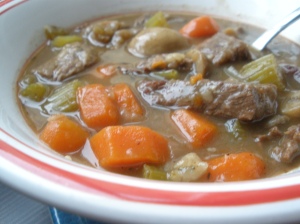 Beef Stew with Mushrooms
Adapted from The Kitchn

Film the bottom of a large dutch oven with olive oil and set over medium-high heat until the oil is hot. Working in batches, add a single layer of meat to the bottom of the pan. Let it sit for 2-3 minutes until the cubes loosen and are seared golden-brown. Flip the cubes and sear the other sides. When all sides are seared, remove the meat to a clean bowl or plate. Sear the remaining meat in batches. If there is any liquid in the pot after the last batch is finished, pour it over the meat.

Clear a space in the middle of the vegetables and sauté the garlic until fragrant, about 30 seconds. Add the thyme and bay leaf, and stir all the seasonings into the veggies.

Pour the wine into the pan to deglaze, scraping up all the browned bits from the bottom of the pan as the wine bubbles. Let the wine reduce down until most of it has evaporated or been absorbed by the veggies.

Add the meat and any drippings back to the pot. Pour in the stocks and top with enough water to cover the meat and veggies about about a half an inch. Bring the stew to a boil, then reduce the heat to very low.

Cover the pot and let it simmer for 1 hour, until meat is almost falling apart (check by piercing it with a fork or knife. There should be no resistance and the meat should flake apart with pressure). Taste the soup and add salt and pepper as desired.

Finally, before you’re ready to serve, remove a cup of stock from the pot and place in a separate bowl. Add two tablespoons of flour to the stock and mix until combined. There shouldn’t be too many lumps. Once combined, add the flour/stock mixture back to the pot and mix until combined. Not thick enough? Repeat the process, but with less flour. Say, 1/2 to 1 tablespoon.

One thought on “Beef Stew”