The BF and I are both (proudly) from Arizona, so when we went home for the holidays it was meet the parents time. Though he’d technically “met” my parents before…it was really just a hand shake and a hello before heading out to a friend’s wedding…it was time for a sit-down, have a real conversation with a few awkward silences and maybe a few gaffes dinner.

What setting could be more appropriate for such an important event as my family’s favorite Mexican food restaurant!? I’m half Mexican-American…and I take my Mexican food seriously. Valle Luna is, hands-down the best Mexican food you can get in a restaurant that doesn’t have a drive-thru in Phoenix. Plus, who doesn’t want to eat a ton of refried beans, chile con carne, tamales, cheese crisps and tacos ending in bloated, food-coma bliss with your girlfriend and her parents?! 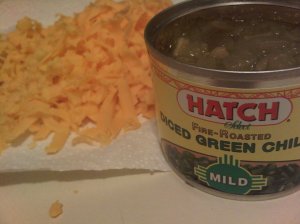 At any rate, dinner went well (no awkward silences, and thankfully no gaffes) and the food was deeee-lish! Apparently the cheese crisp appetizer was a real stand-out to The BF because Saturday night he was foraging in my kitchen when he had a stroke of genius. My mom sends me cans of Hatch chiles in bulk…I always stock up on tortillas (how very un-Latina of me if I didn’t) and who doesn’t always have cheese on hand. CHEESE CRISPS!!

We put these bad boys together in no time and had the most perfect late-night snack ever. Now, here’s the “recipe”…

Pre-heat oven to 400 degrees. Place two tortillas on baking sheet. Evenly spread 1/2 cup of shredded cheese on each tortilla. Dot each cheese crisp with green chiles to your liking. Bake about 15 minutes or until edges of tortillas start to brown lightly. Let cool for about 10 minutes and cut into pizza-like slices. Enjoy!

One thought on “The BF Cooks: Late Night Cheese Crisps”